More Than 10 Hours of Coverage For First Ever Professional Fitness League on NBC, NBCSN and NBC Sports Live Extra

NBC Sports Group’s coverage will culminate with a live telecast of the National Pro Grid League Final on Friday, October 3 at 10:30 p.m. ET on NBCSN. NBC will broadcast an encore presentation of the NPGL Final on October 5 at 1 p.m. ET. Leading up to the Final, NBCSN will telecast the National Pro Grid League Quarterfinals, September 23-24 from Charlotte, N.C. and the NPGL Semifinals, September 30-October 1 from Las Vegas, Nev. All races shown on NBC and NBCSN will be streamed on NBC Sports Live Extra, NBC Sports Group’s live streaming product for desktops, mobile devices and tablets.

“We are thrilled to bring this new sport category and innovative league to television,” said Ron Wechsler, Vice President, Original Programming and Entertainment, NBC Sports Group. “The skill and athleticism of the National Pro Grid League competitors is incredibly compelling, and something sports fans and fitness enthusiasts alike will enjoy.”

During each telecast, viewers will be provided a front-row seat as teams go head-to-head across 11 different races. Each race is slightly different, incorporating a variety of weightlifting and bodyweight challenges such as, deadlifts, cleans and snatches, pull-ups, handstand push-ups, and sprinting. In addition, the all-access experience will chronicle the stories of many of the amazing athletes competing in the races.

“We are excited to showcase our first ever playoffs and championship to a national audience with a world-class partner like NBC Sports,” said Tony Budding, Founder and CEO of the National Pro Grid League. “Grid features many of the world’s best functional fitness athletes working together under a professional coach. Viewers will be astounded by the speed and strength of the players. No one has ever seen team racing quite like this.”

The Grid Playoffs and Final Television Schedule: (All times ET)

A look back at some of sports funniest quotes.

The guys at SB Nation created NHL, NBA, NFL and MLB teams jerseys and they're awesome!

The NHL has sold division naming rights for the 2021 season

BSG Client Chez Reavie Speaks with ESPN on what the Phoenix Open means to him.

American Express is heading to the desert

"Welcome to Impossible": Vegas Golden Knights Continue to Defy the Odds in Their First Sea 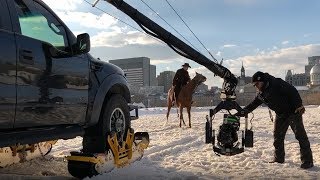